When deciding one what route I would like to write about first, the only one that came to my mind with a resounding ‘YES’, is the Smoky Challenge Adventure Run, or better known as the S.C.A.R.. The S.C.A.R. is a 70+ mile run through the Smoky Mountains that connects Fontana Dam to Davenport Gap using only the Appalachian Trail. This traverse has roughly 18,000 feet of climbing – so that’s over 36,000 feet of elevation change in a little over 70 miles!

When running this kind of run, the mental preparation is key. This was my first overnight run ever and my first run over 50 miles. In addition to this I’d never ran more than 10-15 miles without support before so there were a lot of ‘firsts’ for me going into this. On paper, I had no business being out there, but that’s what the whole point of running ultras is right; to prove something to yourself, to push your boundaries and live in the uncomfortable zone to truly appreciate those moments when everything is just right? 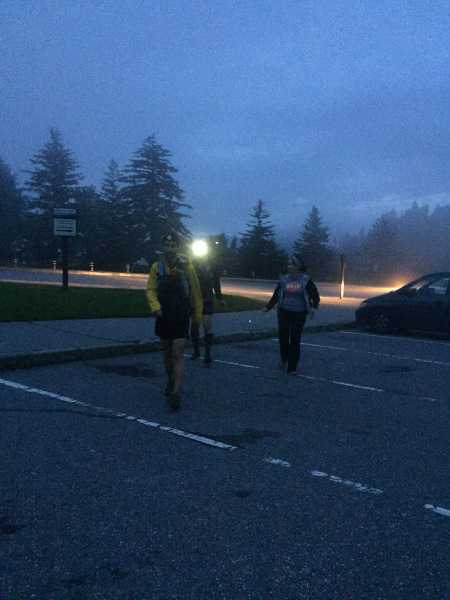 My traverse started at Fontana Dam heading northbound. We camped at the Fontana Dam Resort and the camping is at the bottom of the dam which is really awesome. Campsites include bathrooms and showers. We got on the trail roughly around 8 that morning and without doing our research planned to meet our crew at Newfound Gap, which was 40 miles away. We didn’t realize there were several places before that 40 mile mark that we could have met our crew. We made it those first 40 miles plopped down in some chairs and refueled. Then we hit the next 50k or so to Davenport Gap which we did through the night without anymore aid. For crew, I think this would be a great experience because at Fontana Dam, there are restaurants and other amenities. Then around Newfound Gap are other hiking trails and the experience of Gatlinburg, TN if you want to get in some touristy stuff.

I’ve heard people remark that this is tougher than a lot of 100 milers and after running some I can verify that it is indeed tougher than some 100 milers for me. But, there are plenty of 100 milers that are tougher. So, if you’re looking for some classic mountain running in the southeast and really want to push yourself with a 70+ mile run with little support, then go for it and love every bit of it. For the data people out there, the FKT right now at the time of writing this is 14h 28m 33s (supported) by Luke Bollschweiler and 15h 31m 37s (unsupported) by John Kelly. For those of you with some extra crazy in you, there is a double S.C.A.R. and its record is 2d 17h 49m (unsupported) by Scott Simcox.