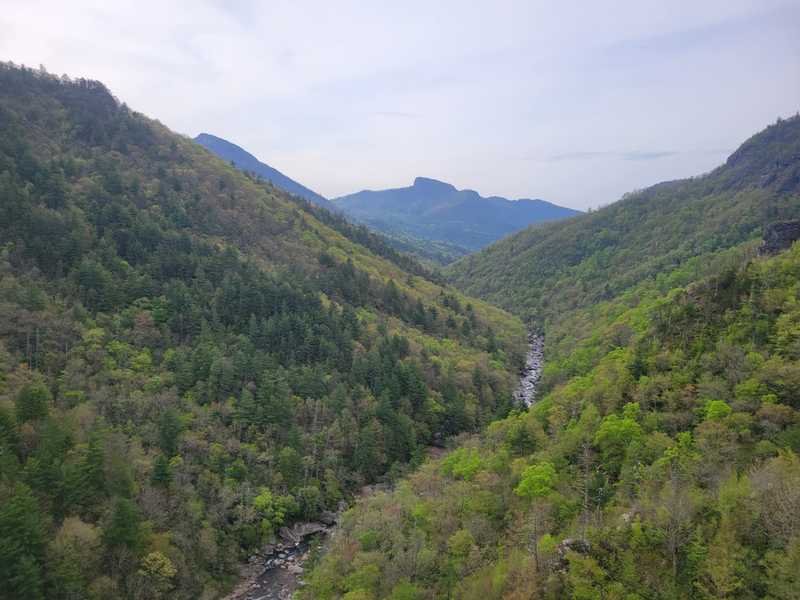 Linville Gorge in WNC is a special place. My first experience with the Gorge was running the 3 Peaks challenge which is a 22 mile run out from Wolf Pit Trailhead going over Shortoff and Table Rock mountains before tagging the turnaround at Hawksbill Mountain. It's mostly on the Mountains to Sea Trail and can be done fairly quickly for Linville's standards. Since then I've been going back exploring more trails and trying to get a better feel for the Gorge. It's always a humbling experience there for sure. It's the one place I run here in WNC that I have to be 'on'. There's no easy way outs there, you're in it once you start.

This idea of how rugged it is birthed a new route that has probably been done, but I don't know who has done it - a Rim to Rim to Rim style run in the Linville Gorge. It connects the highest points on each side of the gorge and requires crossing the Linville River twice. Oh, did I mention the bridge is out as well? On the east rim, you'll tag Gingercake Mtn, although Sitting Bear seems more appropriate since its peak has a view of the entire gorge. Then you'll head towards Hawksbill Mountain. This summit is optional, but definitely worth it. From there, you'll start your descent towards to river using Ledge and Spence Ridge trails. Once across the river with some boulder hopping, you'll head north on the Linville River Trail towards Babel Tower and then start climbing out to hit the west rim of the Gorge by tagging Laurel Knob. Heading back the way you came should give you close to 20 miles and around 6k of climbing all on very technical terrain.

Early on a weekend morning, I got up and went for an attempt at this new route. After the drive out to Linville, I got to my starting trailhead just off of Table Rock Rd at the Jonas Ridge Trailhead. From here you can go north up to Sitting Bear and Gingercake mountain summits. I was feeling good about this and the sun was coming up over the ridgeline. Even though its a steep climb up to Sitting Bear, I was still upbeat about the day. Jonas Ridge was a fun trail to be on and was fairly easy to navigate. I remember the first time of the day that Hawksbill came into sight and I was stoked to see it. It was so huge and I was excited to go up to the summit. After passing some hikers that decided to camp near the top, I took in the views from at Hawksbill and braced myself for what was about to happen. I was about to start a descent down to the river which is daunting when you look down from the summit at the river. 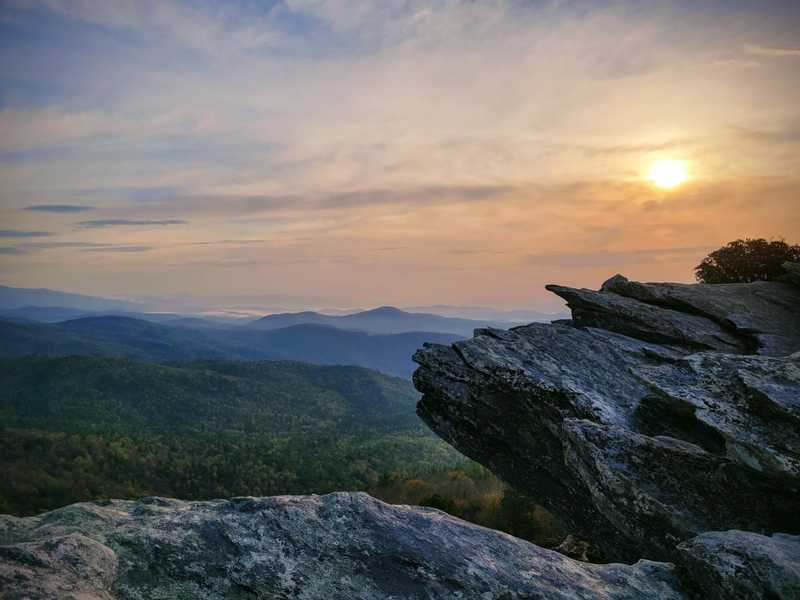 Coming down from Hawksbill I took a left on what seemed like a deer trail, but was in fact Ledge Trail. Ledge Trail is unmaintained trail in the Linville Wilderness and its rough. It was so cool to be on that side of Hawksbill though. The whole time you can look up and see the mountain jutting out over your head. You can take Ledge all the way to Spence Ridge trail which leads you down to the river. You really have to be alert on Ledge Trail because its very easy to lose the trail since there are no markings and the original blazing of the trail is sparse.

Once on Spence Ridge, the trail going down to the river is fairly easy. Just a long descent to the river. Once there I was hopeful because I saw part of the bridge. But, once you get to the more gnarly parts of the river, you realize that the bridge has been washed out. I was lucky that the water levels were low because I could just boulder hop across the river without getting wet. Back in November I crossed the Linville River with a swim and it was very nerve wrecking. The river is very fast and you can get swept down through the rapids easily if you're not ready for it. Once across the river you take the Linville River Trail towards Babel Tower. This trail is never easy. Its just constant ups and downs and its always hard for me to get in a rythm on it.

By the time I made it to Babel Tower, I realized that I was moving pretty slow for the day. I originally thought I would be able to get this route done in 6 hours but that was not the case today. I decided to call it there. I think this route for me would be in the 7 to 8 hour range. Once I climbed Babel Tower and took in the view, I started the route back to my car. I decided to change my route a tad too and took a short cut to Table Rock road so that I could get back earlier. All in all I had a great day out in the Linville Gorge.

I'm definitely going back for this route. Maybe not anytime soon but I'll definitely come back for the Linville R2R2R. I'm hoping that putting these pieces together will get some more people out there.

I want to read more!